Guests have only limited access to various forums on the site. Please login or register for complete access and posting privileges. Then then settle in and enjoy!
Spoiler Things
Would you like to react to this message? Create an account in a few clicks or log in to continue.

Discussion for David Harbour, who portrays Chief Jim Hopper on the show. his Superbowl commercial was good!

Good actor! Never really seen him on any other show I don't think but he is great on this show!

@mrstrange wrote:Never seen him before ST but he is one of my favorites in the show

I love everything about him and the character he plays.

I've been really enjoying following his instagram and the Antarctica trip.

Fav character on the show, he is such a good actor!! 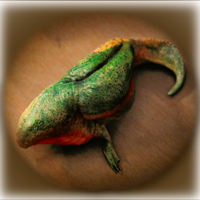 As Promised, Here’s David Harbour Dancing With Penguins in Antarctica 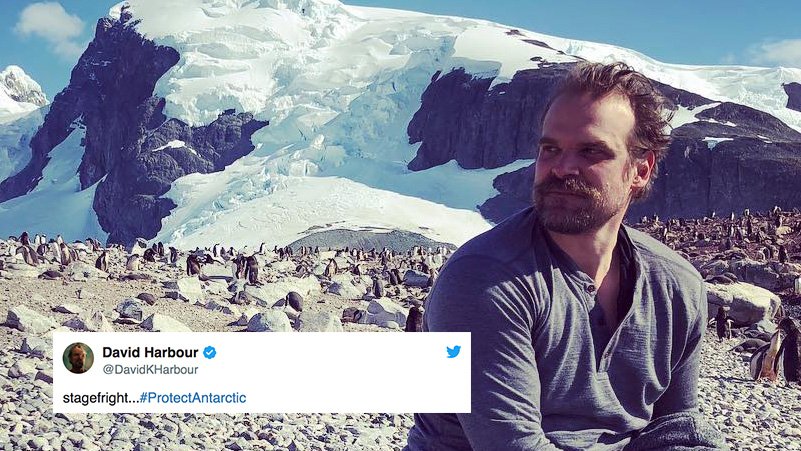 
No matter where you look, David Harbour is dominating the internet right now. Whether it's posing with a student for the most epic senior photos ever or spoofing every single Super Bowl commercial trope, the Stranger Things star has officially become an internet icon. He even made it down to Antarctica to dance with penguins. He's one of the busiest man in Hollywood and yet somehow, found enough downtime in his packed schedule to give a boozy history lesson to Comedy Central viewers. David Harbour's appearance on Drunk History may be his best work yet. Is it too early to start campaigning for him to get an Emmy?

In the Feb. 27 episode of Comedy Central's hilarious sketch series (airing at 10 p.m. ET), Harbour really comes to play during a reenactment of the creation of the Vietnam Veterans Memorial. The narrator of the story is comedian/actor Jennie Pierson, and as a true gift to all of us, she gets completely White Girl Wasted halfway through telling the story of college student Maya Lin, the designer of the memorial.

And that means Harbour, tasked with reenacting the story exactly as told by Pierson, has to act completely White Girl Wasted too. If you thought Harbour was incredible as Chief Hopper, just wait until you see him belch and giggle adorably while apologizing. Is there anything he can't make look cool? Answer: no. Check out this exclusive sneak peek:

Since both Stranger Things and this particular Drunk History story take place in the 1980s, we have to wonder ... does Harbour have it in his contract that he can only play characters from the '80s? Not that we're complaining, because if anyone can pull off that vintage blazer and tie, it's Harbour. But did he just luck out with getting cast in this Drunk History story, or did creator/executive producer/star Derek Waters pick that for him on purpose? We see what you did there, Waters! If anything can keep our Stranger Things obsession going strong during the incredibly long and torturous hiatus before Season 3, this is it.

Bustle's exclusive sneak peek is only a small taste of Harbour's Drunk History appearance, and just when you think he's going to start breaking out Chief Hopper's dance moves, Pierson starts giggling and stops chanting (nooo!). So while he doesn't dance in the clip, there's no telling just how wild he gets in the rest of the story. If he's already breaking it down with penguins in Antarctica, he's probably down to boogie on Drunk History too.

Side note: Harbour is the king of Twitter contests, which is what brought him down to Antarctica to dance with penguins in the first place. He tweeted Greenpeace last month, "Hey @Greenpeace. [How] many retweets to send me someplace to tell emperor penguin couples I think they have terrific parenting ideologies? Perhaps hone the Hopper dance with the males..." Greenpeace responded the next day on Twitter writing, "Hmm, if you get over 200k we'll ask the Captain if you can join our expedition to the Antarctic and dance with the penguins. #StrangerThings have happened." Less than one month later, he uploaded a video that instantly went viral.

So what we're wondering is how many retweets would it take to get Harbour to make a return trip to Drunk History, not as an actor but instead this time as a narrator? Watching Pierson's drunk giggles and tangents coming out of Harbour's mouth is incredible, but can you imagine how entertaining Harbour would be getting wasted with Waters and telling the story of how Greenpeace came to be? He's certainly an expert now on going on Greenpeace expeditions, so this could be peak Harbour.

But now that we think about it, the internet probably couldn't handle so much cool at once. So let's make sure the internet doesn't break and watch Harbour's Drunk History episode tonight instead.

I love Drunk History.  This makes it so much better.

The Drunk History episode was great.  Shannon Woodward was also on (from Westworld), and Colin Hanks.  The stories were funnier than usual, too.  And Harbour's segment was pretty funny. 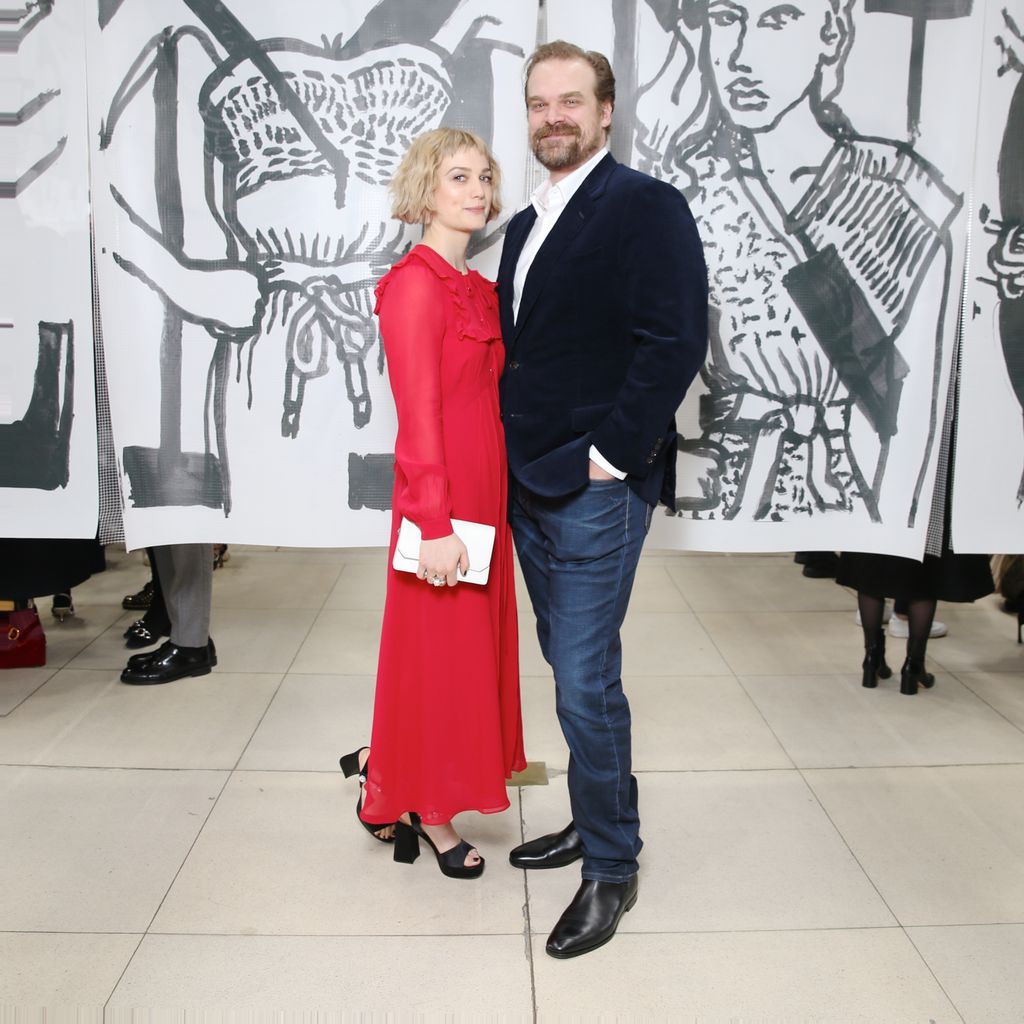 Yesterday at the Miu Miu show in Paris.

I love everything about him and the character he plays.

Me too! I have a huge crush on Hopper, tbh! Love every scene he is in. 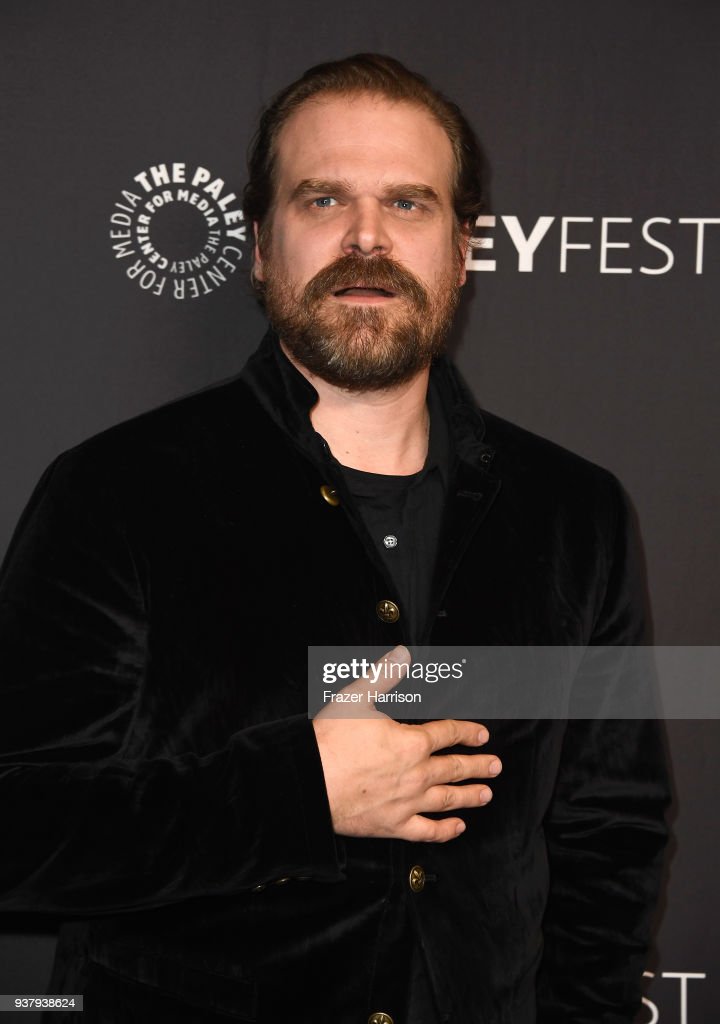 If you're a fan of podcasts, David will be on an upcoming episode of WTF with Marc Maron.  He mentioned it on today's episode. 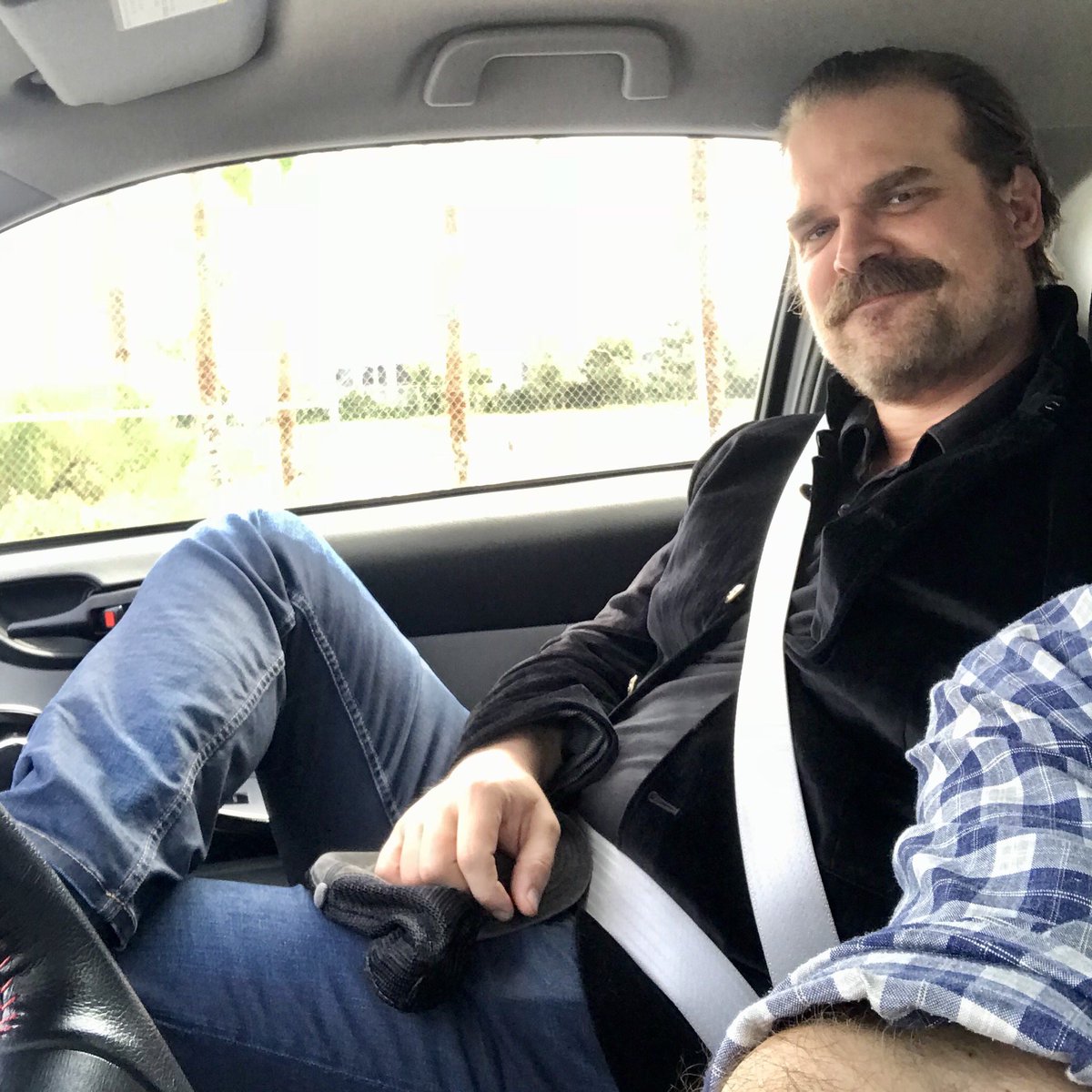 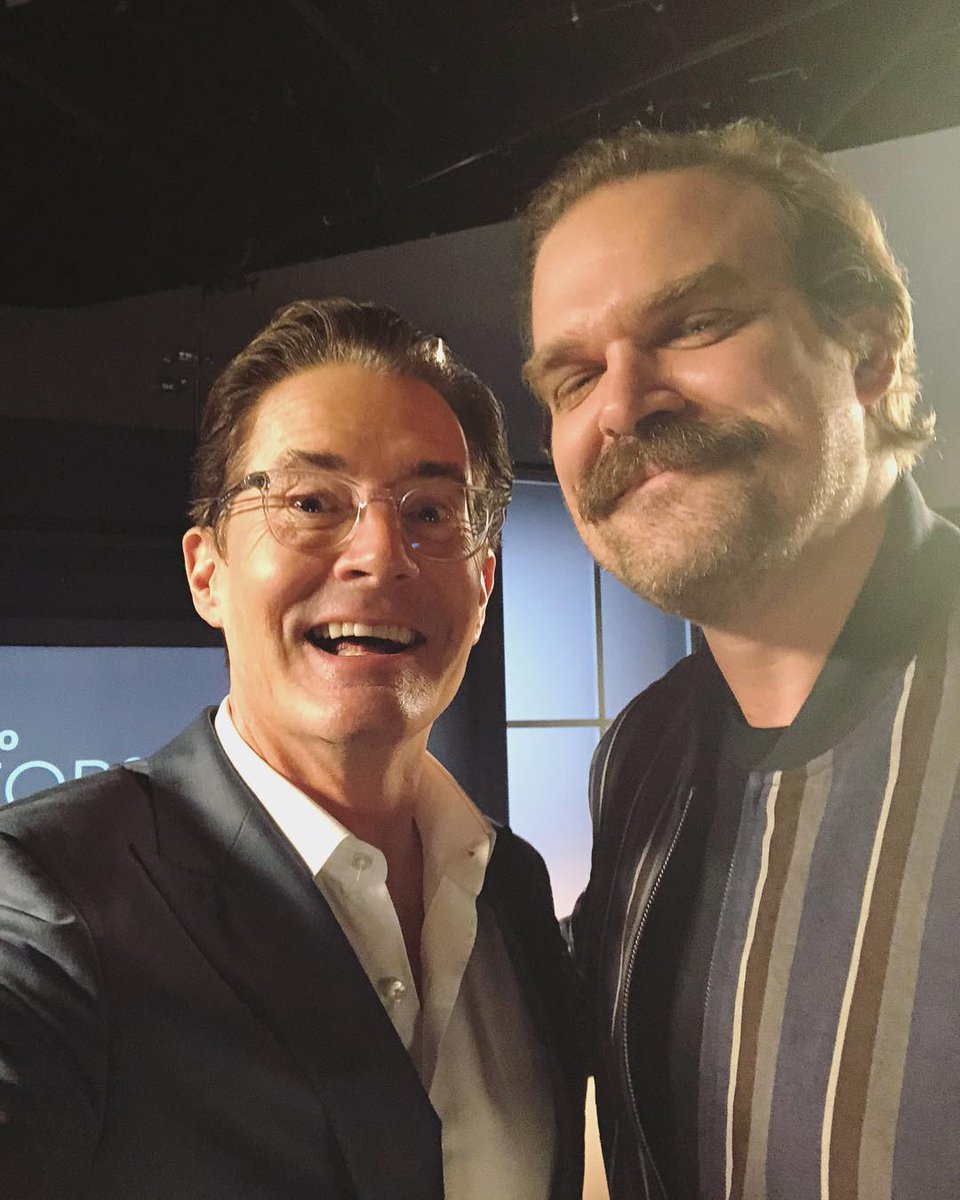 Can't embed the tweet, but David Harbour ran into Kumail Nanjiani at Best Buy, which I'm assuming, is in LA somewhere...

@hoogie wrote:Can't embed the tweet, but David Harbour ran into Kumail Nanjiani at Best Buy, which I'm assuming, is in LA somewhere... 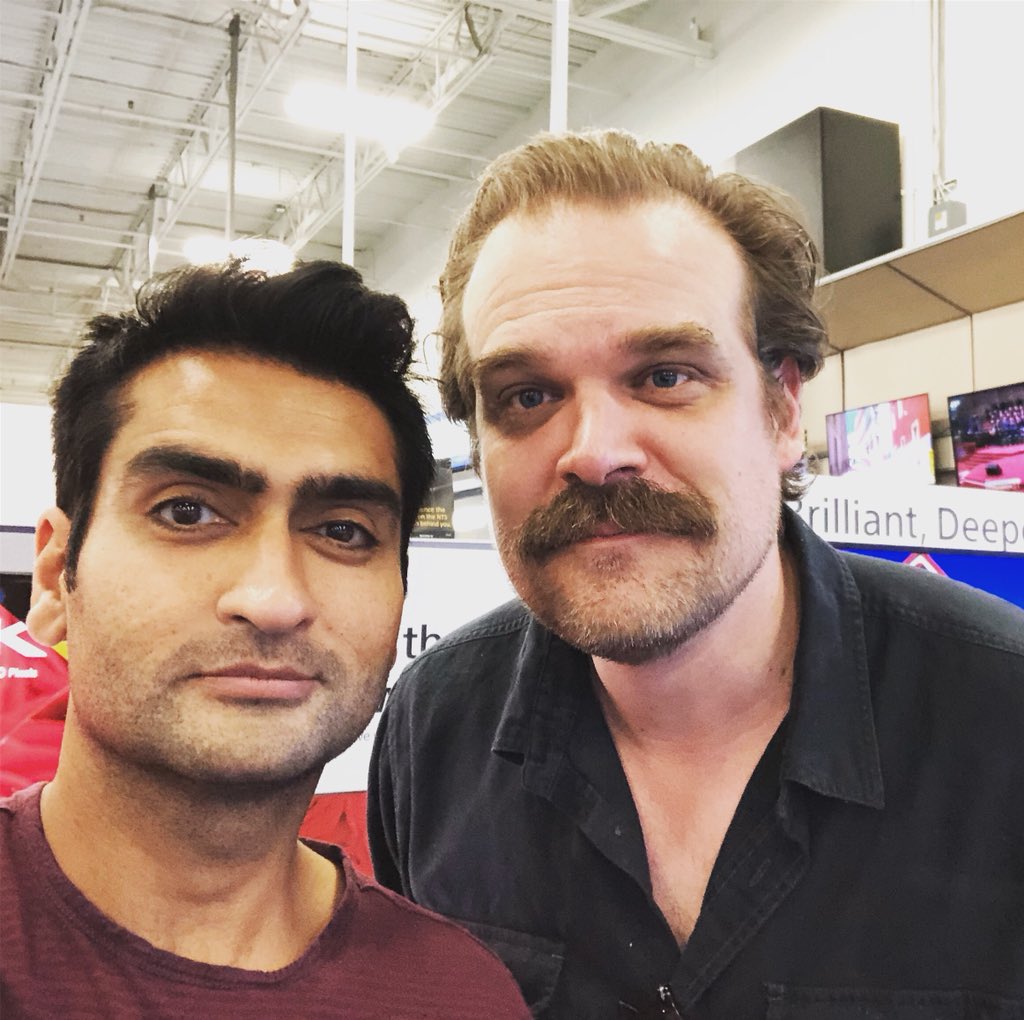 I miss the beard a little.

If you listen to podcasts, David will be on WTF with Marc Maron on Monday!